I am reading a book Coders at work. Each chapter consists of interview with an experts in the field of computer programming, engineering and science. Most of them had started programming during 70’s-80's, the time when there wasn’t many choice of programming languages available like modern day. Most of them were programming in low-level like assembly or binary. I was thrilled and excited from reading of their journey. It motivated me to learn small things about assembly and learn more about machine closely. I am writing this blog post on my journey of learning assembly.

I have a macbook pro. It’s a 64-bit machine. Intel based. I started collecting information on resources and tips to get started. My machine is x86-64 so it is x86 assembly. I found little resources on starting assembly on mac, and among what I found was for linux. Throughout the search I have collected good blogs and resources that I’ll be sharing. This post is more about what I am discovering or learning rather than tutorial.

I started with evergreen “Hello world” program. Here is the short program that i will try to explain what i have figured it so far.

Lets talk about registers. General definition is:
The registers are like variables built in the processor. 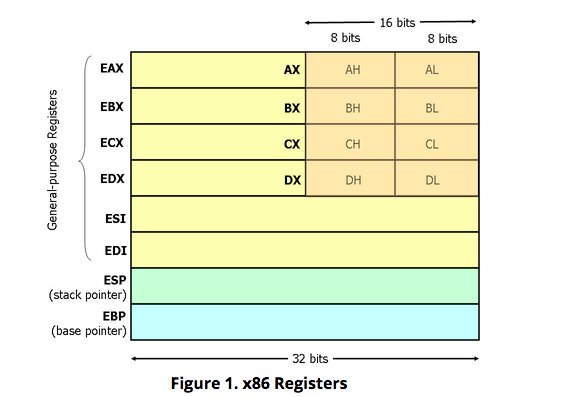 In our hello world code we have used registers like rbp, rsp etc. In above diagram we see ebp, esp etc they are 32 bit variant - In other hand we used 64 variant whose inital first letter starts with r. Naming pattern seems similar except the initial first letter. I found this link where short detailed information on each register is given. Each register has their specific role of task to perform but after studying from various sources it seems that most registers are capable of being used in other tasks when become available.

I did find myself comfortable with AT&T syntax. Let’s continue with it.

.data is directive that define section or regions where variables can be declared. I will declare two string variables named str1 and str2. I will also declare one long type variable called num1

Information from various resources explains that variable inside .data are treated as global variable. I am not much sure on how globals are treated in assembly. I may be wrong of my understanding of this directive so please do rectify me.
In our hello world sample, .section __TEXT, __text can be replaced with .text built in directive. This is because according to documentation:

.text directive has been used mostly in many examples that I have found. It gives the impression that our main instruction goes inside it.

Now moving further we see .global _main. To make an executable program of our assembly code two process is required: compile and link. We need a start entry point for the program to execute from like main() function in C. We could say that .global _main act as a main function. If we don’t declare entry point with .global we get the following error:

Next line in our sample starts instructions, and we need a stack for calling instructions. 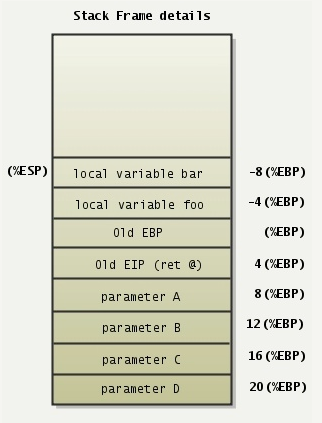 Now we display Hello World string:
At the moment I don't have too much information on lea but documentation says
lea
The lea instruction places the address specified by source into the register specified by destination.
It looks leaq str(%rip), %rdi copies address not the value of %rip to %rdi. str(%rip) can be considered as [%rip + str], It says that we are trying to access a location in %rip register at “str” offset from start point. I am not too sure but it could mean that “str” offset value means bytes consumed by str variable that we declared. Secondly, global variables can be accessed from %rip only hence it seems our str value is residing in %rdi register. Why are we copying address to %rdi register? I don’t have proper explanation so i tried copying into other register and it failed. Documentation says:
%rdi
Used for string, memory array copying and setting and for far pointer addressing with ES
Doc explicitly talks about strings, could this be reason for using %rdi? This is the only depth of my information so far. Next instruction callq _printf calls printf from C language. In mac it is prefixed with underscore unlike in linux(As I mentioned most code sample are for linux in web). It seems that value inside %rdi register simply gets printed after the call. Again I apologise for my depth of info here. We clean up our stack after end of instructionsaddq $32, %rsp closes the address range that we earlier created. popq %rbp removes the base pointer from the stack. Time to compile and link our program:
compile
as hello.s -o helloas.o
link
ld -e _main -macosx_version_min 10.10 -arch x86_64 helloas.o -o helloas
-e tells start/main entry point
-macosx_version_min specifies the minimum version of mac (if not provided then current os version is taken)
-arch mention architecture that you confirming to
-o saving executable with meaningful/custom name

I got an error:

If we try to understand it looks printf function is not found and it makes sense because it is not assembly. We need to link c library too.

We are able to crate and run our executable:

I apologise if post seems inadequate in depth. There are lots of area that I am still discovering. I am trying to learn small steps of assembly and want to share with others who also are looking into dive.

How To Optimize Laravel Code Eloquently With UpdateOrCreate()

प्रोग्रामिंग: एक परिचय (An Introduction to Programming in Nepali)

How to add a completion handler block for when I pop UIViewController?

How to find out distance between gps location coordinates in Swift?

sizeForItemAt of UICollectionView not working in Swift