I went outdoors to forest in hills of Nepal to forage mushrooms and identify them. Monsoon has announced its presence and marks the season for some edible mushrooms from Amanita family to be found in wild. Amanita is tricky family and recommended to avoid by non-experienced mushroom foragers. We were looking for mainly edible Caesar’s Mushrooms or Amanita Caesarea. There are poisonous imposters so be careful and be 100% sure.

Amanita family has many beautiful colourful capped mushroom that fascinates and also scares me. It scares me because many of poisonous mushrooms also comes from genus Amanita. I have heard about infamous Death Cap and Destroying angels. Someone told me that there are delicious edible mushrooms like Caesar’s Mushrooms or Amanita Caesarea in the family of Amanita too if you are aware and can identify the edible bunch. With the beautiful colours of mushroom it is very easy to have mistaken identity for there are deceiving look alike of edible members of Amanita. That is the reason why I wanted to learn about identifying edible amanitas from poisonous amanitas but not alone. Amanita is really tricky and dangerous so be with experienced person. To learn as always I start with small and from my mother I learned that Caesar’s mushroom or Amanita Caesarea is most common edible amanita found in the forest near us - so I wanted to learn to identify Amanita Caesarea.

Forest is spread over hills so there was an uphill hiking. In the beginning of our hike I came across white mushrooms - some in late stage and some in their early button stage. These were edible mushroom which are called “White Salle chyau” in Nepali. Literal translation is White Caesar’s Mushroom but I haven’t found true English or Scientific name of it yet. In internet photo it resembles straw mushroom too. I am hoping I will find correct english name soon. 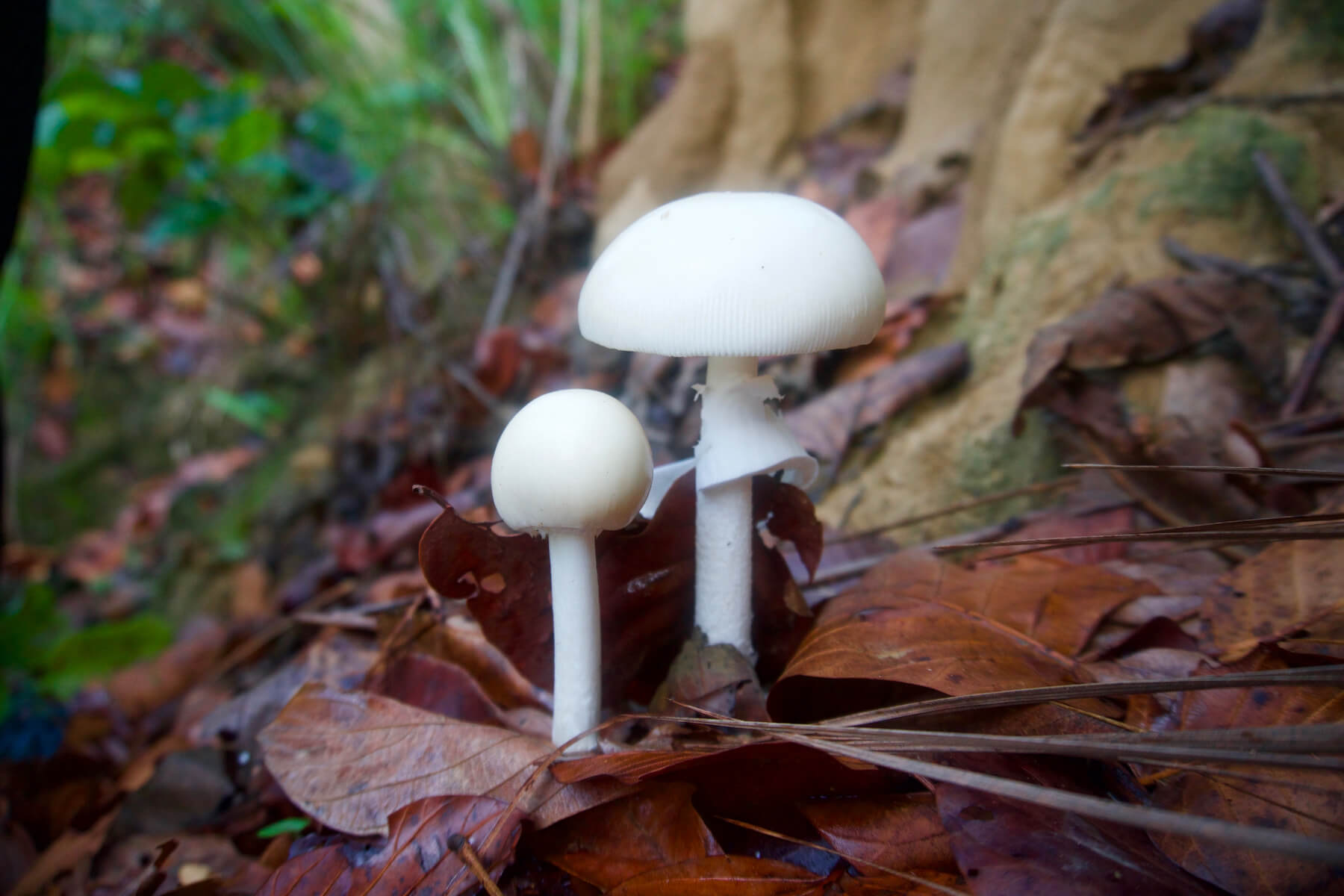 Some identification I learned:

I reached upper elevation of hill where Caesar’s mushroom or Amanita Caesarea started making appearance. They were beautiful to watch them growing in wild in the floor of forest. The distinct orange or somewhat orange-yellow colour was fascinating and scary too. The identification property was exactly same as edible white mushroom that I picked earlier. This is the reason why It made sense where literal translation of white mushroom from Nepali to english was: White Caesar’s Mushroom. Only difference in identification I found was the colour. Their cap looked exactly like an egg. The orange-yellow colour matched the outer shell of the local organic eggs here from my region. Gills and stem were light yellow colour. 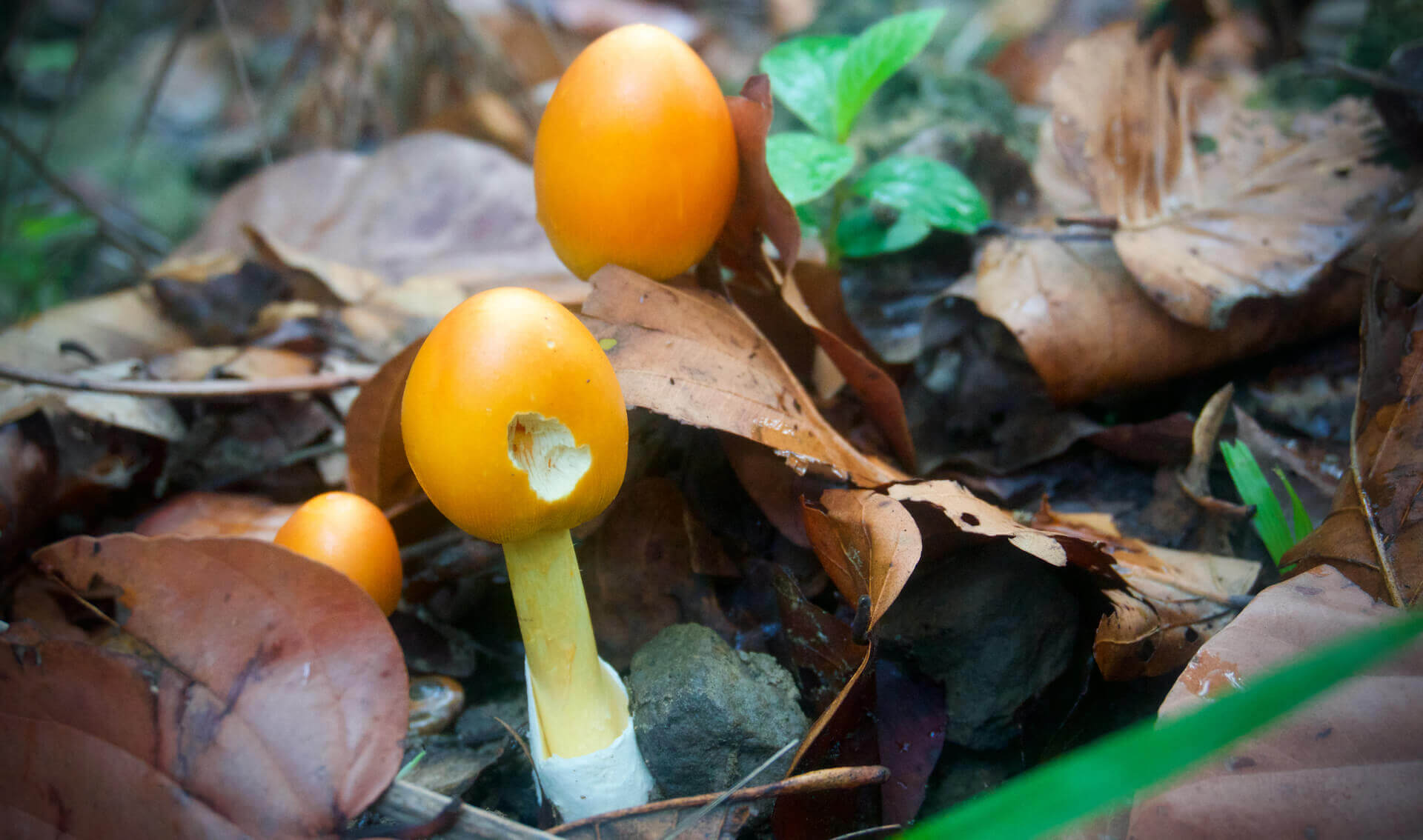 It was an educational and fun outdoor trip for me after months of strict lockdown. Soon when monsoon winds will be making stable stay then Puffballs mushroom will be making appearance too and I will do another foraging trip.

To be informed. This post isn’t How to guide but my first outdoor mushroom hunting experience. I was with an experienced guide. I would recommend you to be with an experienced forager when identifying edible Amanita mushrooms. It should not be taken lightly for they are dangerous beauties.